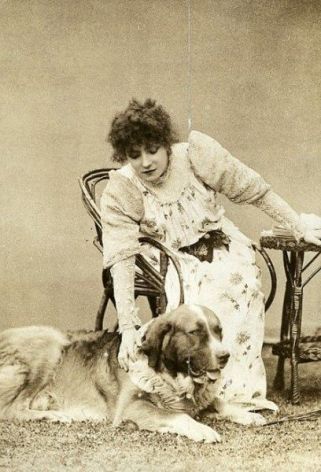 Fêted for her talent on-stage, Sarah Bernhardt was also an accomplished sculptor and exhibited at the Paris Salon. In London, she used the proceeds of a sale of her work at the William Russell Galleries to add several exotic creatures to her private menagerie. These included a cheetah and a wolfhound, which she bought from the Cross Zoo in Liverpool. She had hoped to purchase two lions and a dwarf elephant but had be content with seven chameleons, which were thrown in for free by proprietor, Mr. Cross; she had a gold chain made for her favorite, Cross-ci Cross–ça, so that he could sit on her shoulder while attached to her lapel.

Yet, Bernhardt was not always kind to her animals. The death of Ali-Gaga, her alligator, was attributed to his diet of milk and champagne, and she shot her boa constrictor after he swallowed one of her sofa cushions. So why did she keep so many exotic animals? Did she see them as an extension of her own untamed and unusual persona – she was often credited with having animal traits, most notably those of a snake.  Did she regard these creatures as beloved pets or living accessories? After all, her tortoise Chrysagére, who died in a fire, had a gilded shell set with brilliant topazes. I’d love to know more about the nature of Bernhardt’s relationship with the animals she owned.

Sarah Bernhardt is just one of the remarkable women in my book Wilde’s Women, read more here.

One response to “Sarah’s Menagerie”