May Fortescue: ‘not simply a pretty, brainless doll’

When Irish writer Katharine Tynan attended Lady Jane Wilde’s celebrated salon for the first time one of the people she met there was actress May Fortescue, a member of the original cast of Patience, the comic operetta by Gilbert and Sullivan in which Oscar was satirised as Reginald Bunthorne, a foppish poet.

Born Emily Finney, the daughter of a Peckham coal merchant, May Fortescue was prominent in the gossip columns of the day since she had just announced her intention of establishing her own theatre company using the £10,000 awarded to her in a breach of promise action.

This was appropriately mischievous since she blamed Hugh McCalmont Cairns, 1st Earl Cairns, Lord Chancellor and a dour Ulsterman, for persuading Arthur William Cairns, Lord Garmoyle, his son and her erstwhile fiancé, to end their engagement in January 1884 on the grounds that he considered the theatre to be ‘the ante-chamber of hell’. This despite the fact that she had given up the stage and persuaded her sister to do likewise.

When Frank Harris, editor of the Evening News, published May’s account of the breakup under the headline ‘Beauty and the Peer’, the circulation of his paper doubled.[1] Interestingly, American-born artist James McNeill Whistler had recently hosted an engagement luncheon for Oscar, Constance and the erstwhile couple. 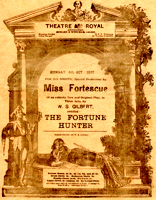 May, who had taken up acting to support her family after her father’s business failed, was highly intelligent and exceptionally well educated for a women of her time. In a letter to Garmoyle, written in response to his ending of their engagement, she assured him that she was ‘not simply a pretty, brainless doll’.[2] This proved to be the case. Her theatre company was a success and toured for years, often performing the works of Gilbert and Sullivan. May Fortescue acted for four decades after her broken engagement and lived to the age of 88.

Although not qualified to be one of Wilde’s Women, she was admirable and formidable nonetheless.

One response to “May Fortescue: ‘not simply a pretty, brainless doll’”