The first clashes of the Irish rebellion of 1798 took place just after dawn on this day (24 May). Much of the action took place in the county of Wexford in the South-East of Ireland, and one of the families caught up in hostilities was that of the Reverend John Elgee, Grandfather of Lady Jane Wilde, the foremost of Wilde’s Women.

John Elgee, Rector of Wexford by then, almost lost his life during the rising of 1798, when his home was occupied by a bloodthirsty band of local pike-men. Although many Protestant clergymen and their families were murdered at that time, the Elgee family was spared; otherwise there would never have been an Oscar Wilde. Local historians attributed this act of mercy to the gratitude of a former prisoner to whom Elgee had shown kindness in his role as inspector of the local gaol. [i] In Ancient Cures, Charms, and Usages of Ireland: Contributions to Irish Lore, Jane Wilde recorded details of her family’s involvement:

‘On the day the rebels entered Wexford, the rector Archdeacon Elgee, my grandfather, assembled a few of his parishioners in the church to partake of the sacrament together, knowing that a dreadful death awaited them. On his return, the rebels were already forcing their way into his house; they seized him, and the pikes were already at his breast, when a man stepped forth and told of some great act of kindness which the Archdeacon had shown his family.

In an instant the feeling changed, and the leader gave orders that the Archdeacon and all that belonged to him should be held safe from harm. A rebel guard was set over his house and not a single act of violence was permitted. But that same evening all the leading gentlemen of the town were dragged from their houses and piked by the rebels upon Wexford Bridge.’ [ii] 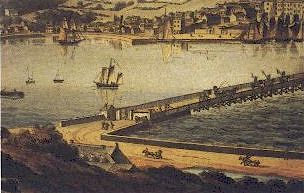 Rector Elgee, widely admired in the community, was appointed Mayor of Wexford in 1802 and elevated to Archdeacon of Leighlin in 1804. Jane was little more than a baby when he died in 1823. A tribute in the Waterford Mirror lamented the passing of a man who had, ‘died universally regretted – as he had lived beloved by all his parishioners’.[iii]

[i] One example is James Bentley Gordon, History of the Rebellion in Ireland in the Year 1798 (Dublin, T. Hurst, 1803), p.176. An article in the Belfast Newsletter of 12 March 1824 repeats this version. Elgee undoubtedly had a connection with Wexford Gaol: Parliamentary records suggest that he acted as prison inspector and procured supplies for the prisoners. Details of payments to purchase provisions, along with an application for a salary on behalf of Rev. John Elgee are included in accounts presented to the House of Commons from the East India Company, printed in 1808, p.429