Today marks the anniversary of the birth of Henry James, who is regarded as one of the key figures of nineteenth century literature; his most famous works including Portrait Of A Lady, The Bostonians, The American and Washington Square.

Although born in New York City on 15 April 1843, James spent much of his life in London and became a British citizen. His grandfather, William James, was from Bailieborough in County Cavan, Ireland. Best remembered as a novelist, James was also a playwright and rival of a certain Oscar Wilde. The two clashed on several occasions and James actively campaigned to lessen Wilde’s success during his tour of America in 1882. In honour of his birthday I am posting two excerpts from Wilde’s Women that illustrate the professional rivalry between Henry James and Oscar Wilde:

FROM CHAPTER 1: THE REAL MRS. ERLYNNE

Also present [at the first performance of Lady Windermere’s Fan] was Henry James, another would-be playwright but someone who rarely had a kind word for Oscar. He deemed the play ‘infantine’ and of a ‘primitive simplicity’, a pronouncement that had all the characteristics of a fit of professional pique. Yet, even he could not ignore the obvious enjoyment of those seated around him, and he was forced to admit, albeit grudgingly:

There is so much drollery – that is, “cheeky” paradoxical wit of dialogue, and the pit and gallery are so pleased at finding themselves clever enough to “catch on” to four or five of the ingenious – too ingenious – mots in the dozen, that it makes them feel quite “décadent” … and they enjoy the sensation as a change from the stodgy.*

The interior of the St. James’s Theatre by John Gregory Crace

FROM CHAPTER 17: A LESS THAN IDEAL HUSBAND

Given the delight with which The Importance of Being Earnest was received, it is extraordinary to think that George Alexander [Actor-Manager at the St. James’s Theatre] passed it on to Charles Wyndham at the Criterion. He asked for it back once he realised that Henry James’s Guy Domville was failing to attract an audience.

For more on their rivalry, professional and personal, read Wilde’s Women:

Violet Hunt, born in 1862 in Durham in the north of England,was the daughter of Pre-Raphaelite landscape painter Alfred William Hunt and his wife, Margaret Raine Hunt, bestselling novelist and translator of the stories of the Brothers Grimm. Her parents took her to live in London when she was just three-years old and she grew up in Pre-Raphaelite circles. Violet was bright, vivacious and very beautiful. At thirteen, she was writing poetry for Century Magazine. Ellen Terry described her as ‘out of Botticelli by Burne-Jones’. 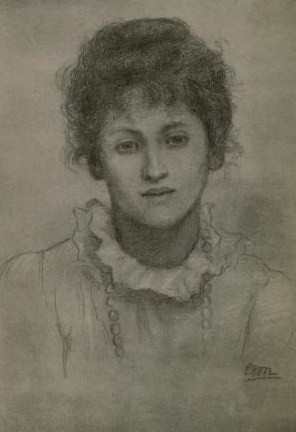 Violet Hunt from The Flurried Years (1926)

On one occasion, when Letitia Scott, wife of Margaret’s art tutor, William Bell Scott, invited Margaret, to come and meet ‘a wonderful young Irishman just up from Oxford’, she brought seventeen-year-old Violet along. Oscar Wilde, for it was he, flirted outrageously with Violet:

Beautiful women like you hold the fortunes of the world in your hands to make or mar,

he told her, adding conspiratorially:

We will rule the world – you and I – you with your looks and I with my wits.

Little wonder she thought herself ‘a little in love’ with him.

In her memoir, The Flurried Years (1926), Violet insisted that she had ‘as nearly as possible escaped the honour of being Mrs. Wilde’, adding:

I believe that Oscar was really in love with me – for the moment and perhaps more than a moment for Alice Corkran told me quite seriously that he had said to her quite seriously, “Now, shall I go to Mr. Hunt and ask him to give me little Violet?”

Oscar, who considered her, ‘the sweetest Violet in England’, called on the Hunts almost every Sunday for two years. When he went to America, Violet sought his mother out, hoping for news of her son:

Lady Wilde sits there in an old white ball dress, in which she must have graced the soirees of Dublin a great many years ago,

she wrote; she was not quite as sweet as she looked.

When Oscar returned from America with his hair freshly coiffed and curled, Violet decided he was, ‘not nearly so nice’ after all.

Although she adored the company of men, and described her life as ‘a succession of affairs,’ Violet Hunt never married. She would ‘snub eligibles on principle’, preferring married men since ‘no one could imagine that I wanted to catch them’. She could be terrifying: ‘I rather liked her,’ D.H. Lawrence admitted, adding: ‘She’s such a real assassin’.

Her many conquests included H.G. Wells, with whom she had an affair lasting a year when she was forty-four, and Somerset Maugham, but her most enduring love was for Ford Madox Ford; at thirty-six, he was eleven years her junior when they embarked on their lengthy affair. Violet’s once good opinion of Oscar may have been tainted by Ford’s dismissal of his writing as ‘derivative and of no importance’, although he did acknowledge ‘as a scholar he was worthy of the greatest respect’.

…a slightly stuttering, slightly lisping, long-limbed boy, sitting in the big armchair at Tor Villa, where we lived then, tossing the long black lock on his forehead that America swept away, and talking – talking…

Oscar had always encouraged Violet to write. In time, she enjoyed an enviable reputation as a novelist, biographer and hostess of a thriving literary salon. Among her guests were Rebecca West, Ezra Pound, Joseph Conrad, Wyndham Lewis, D.H. Lawrence, and Henry James. Her interest in furthering the cause of women is reflected in the themes of her novels, the first of which, The Maiden’s Progress, was published in 1894. She joined the Women Writers’ Suffrage League in 1908, the year she helped Ford establish the English Review. Although she never published her memoir My Oscar, she did fictionalise him as fickle suitor Philip Wynyard in her semi-autobiographical novel Their Lives (1916).

When she died of pneumonia, aged seventy-nine, she left behind collections of poetry and short stories, seventeen novels, her memoirs of her time with Ford, a biography of Lizzie Siddal, six collaborations, two book translations, and numerous critical articles that were published in London newspapers and magazines.

Unlike that of many of her literary conquests, none of her work remains in print, although some of it is available to read online. Truly, she is one of Wilde’s Women.

Violet: the story of the irrepressible Violet Hunt and her circle of lovers and friends – Ford Madox Ford, H.G. Wells, Somerset Maugham, and Henry James by Barbara Belford (New York, Simon and Schuster, 1990)

On 8 June 1870, Charles Dickens suffered the last in a series of strokes. He never regained consciousness, and died the following day at his home, Gad’s Hill Place in Kent. He was just fifty-eight years old.

During a hugely successful career Dickens had toured America several times, although his first tour, in 1842, ended badly when he insisted on the need for copyright legislation to protect his rights to his work. That his return tours of 1867 and 1868 were far more successful was due in no small part to the efforts of a number of influential literary women who championed him and later championed Oscar Wilde. Yet their efforts were not always rewarded.

The first of these was the exuberant Jane Tunis Poultney Bigelow, an important figure in the New York literary scene and a woman who made it her business to cultivate the leading writers of the day. Bigelow’s correspondence with Wilkie Collins spanned two decades, and she had developed an interest in Dickens that bordered on an obsession. It was reported that when Dickens was staying at the Westminster Hotel near Union Square in New York, an elderly widow called Mrs. Hertz prevailed upon the hotel manager, a friend of hers, to introduce her to him. As Mrs. Hertz was leaving the great writer’s room, Jane Bigelow allegedly accosted her and knocked her out.

When Jane’s diplomat husband, John Bigelow, co-editor and co-owner of the New York Evening Post served as Ambassador to Paris, newspapers described him as ‘a power in Parisian life … [who] enjoyed the attention and esteem of a woman, vivacious, witty, and intellectually vigorous’. When Bigelow was posted to Berlin, it was reported that Jane’s staunch insistence on the superior quality of American pork, led Bismarck to describe her as one of the brightest women he had ever met, and ‘eight Royal auditors’ to admit that American pork was ‘good enough for anybody’.* However, she was sometimes considered a liability, particularly when she allowed her servants to sit in the German imperial box at the opera.

In Florence, Bigelow called to pay her respects to novelist Ouida, only to hear her shout: ‘Tell Mrs. John Bigelow, of New York, that I don’t want to see her or any other American; I don’t like them’. Undaunted, as ever, Jane replied: ‘You ought to be ashamed of yourself. We’re the only fools that read your nasty books anyway’. So thoroughly charmed was Ouida by her audacity that she invited Bigelow to stay for a month.

Back in New York in 1882, Jane Bigelow proved to be a loyal and useful ally to Oscar Wilde during his lecture tour of North America.

Two other women who feature in Wilde’s Women and had connections to both Dickens and Wilde are English-born Jane Cunningham Croly, better known by her pen-name ‘Jennie June’, and Kate Field, journalist, actress and campaigner for women’s rights.

Croly was an exceptionally useful supporter to cultivate. Credited with pioneering and syndicating the ‘woman’s column’, she ran the women’s department at the New York World for ten years and was chief staff writer at Mme. Demorest’s Mirror of Fashions, later renamed Demorest’s Monthly Magazine. As ‘Jennie June’, she wrote ‘Gossip with and for Women’ for the New York Dispatch and ‘Parlour and Sidewalk Gossip’ for Noah’s Sunday Times. The sole breadwinner in her family, she juggled the responsibilities of motherhood and journalism by spending mornings at home before heading into the office at noon and working steadily until after midnight. Sunday nights were reserved for entertaining New York’s intellectual and artistic elite.

A passionate believer in networking for women, Croly founded the Women’s Parliament in 1856. She also established the General Federation of Women’s Clubs, and the New York Women’s Press Club. The elite members of her own New York Women’s Club campaigned for education, improved working conditions and better healthcare for women. She responded to the exclusion of women journalists, herself included, from an honorary dinner organised for Charles Dickens by the New York Press Club by founding Sorosis, America’s first professional woman’s club.

Kate Field was nothing short of legendary; the New York Tribune described her as ‘one of the best known women in America’, while the Chicago Tribune called her ‘the most unique woman the present century has produced’. A popular lecturer and prolific travel writer, she wrote for several prestigious newspapers including the Chicago Times-Herald, the New York Tribune and the Boston Post. She was the inspiration for Henrietta Stackpole, Henry James’s crusading feminist journalist in The Portrait of a Lady. Extraordinarily well connected, she had hosted such luminaries as Charles Dickens, Robert Browning, Elizabeth Barrett Browning, George Eliot, Anthony Trollope, and Mark Twain. Although she knew Dickens well and had covered his final American tour for the New York Tribune, Field too was barred from the Press Club dinner that honoured him, a snub that prompted her to assist Jane Croly in founding Sorosis.