Marie Corelli: ‘the idol of suburbia’

As Women’s History Month comes to a close I’m posting an excerpt from Wilde’s Women that describes the remarkable and hugely successful Victorian novelist Marie Corelli. It is difficult for us to imagine how significant she was nowadays, since she has fallen out of fashion, but at the height of her popularity, she was the best selling and most highly paid author in England. There is a website dedicated to her with a great deal more information. Here is my short profile from Wilde’s Women:

Marie Corelli’s origins are shrouded in mystery. Born in London on or around 1 May 1855, a date she rarely admitted to, she was almost certainly the daughter of Elizabeth Mills, lover and later second wife of the journalist Charles Mackay, who was believed to be Corelli’s father. Known affectionately as Minnie, she reinvented herself as Marie di Corelli in order to earn a paltry living giving piano recitals in private homes.

Corelli’s first novel, A Romance of Two Worlds, was published in February 1886. It struck a chord and, as a result, a second novel, Vendetta, appeared later that year. By June 1887, Corelli had published a third, Thelma, to great acclaim. Ellen Terry, who lived six doors down from her on Longridge Road, Kensington, adored her books. Lillie Langtry asked if she might dramatise them. Oscar Wilde would have sympathised to hear that she had been snubbed by Rhoda Broughton, who she had been particularly keen to meet.

At the height of her popularity, Marie Corelli was the best selling and most highly paid author in England. According to novelist and poet Arthur St. John Adcock, ‘many of her most enthusiastic admirers are men of the professional classes – doctors, barristers, lawyers, writers, men of education and intelligence’.[i] Her mystical, melodramatic novels were admired by Gladstone and Tennyson, and Queen Victoria had them sent to Balmoral as soon as they appeared.

Yet,Corelli attracted the scorn of critics; Grant Allen in the Spectator called her:

…a woman of deplorable talent who imagined that she was a genius, & was accepted as a genius by a public to whose commonplace sentimentalities & prejudices she gave a glamorous setting.

This didn’t dampen her popularity and she was described with great accuracy as ‘the idol of suburbia – the favorite of the common multitude’.[ii]

Wilde started out as a fan.On one occasion, heassured Corelli that he had ‘read the book [A Romance of Two Worlds] over again,’ adding, ‘you certainly tell of marvelous things in marvelous ways’. He advised her to ignore her detractors, writing: ‘Such a lot of talking-about-you does more good than an infinite number of reviews’.[iii]She appears to have heeded his counsel since, in the foreword to The Sorrows of Satan, she wrote:

No copies of this book are sent out for review. Members of the Press will therefore obtain it (should they wish to do so) in the usual way with the rest of the reading public – i.e. through the Booksellers and Libraries.[iv]

Although she was so pioneering and resourceful herself, Corelli was not a feminist. In her novels, she celebrated the frailty of women, and she opposed the extension of voting rights. Yet Wilde persuaded her to write a speculative article on ‘Shakespeare’s Mother’ for The Woman’s World. He admired her success, but would hardly have wished to emulate her style, which he grew to dislike. Years later, when a prison warder in Reading Jail asked him his opinion of Corelli, he replied: ‘Now don’t think I’ve anything against her moral character, but from the way she writes she ought to be here’.[v]

They had fallen out by then and she lampooned him mercilessly in The Silver Domino, or Side Whispers, Social and Literary, which was published anonymously in 1892, characterizing him as a lumbering elephant who was guided through life by a dainty fairy, a thinly disguised Constance Wilde. Corelli dismissed Constance as ‘a charming little Radical,’ but she found her compelling; she considered her ‘one of the prettiest things alive’ and ‘infinitely more interesting than the Elephant himself’.

Marie Corelli never married. She never discussed her sexuality but would appear to have been attracted to women; she wrote ambiguous love poems and co-habited happily for decades with her companion Bertha Vyver, who referred to her as ‘beloved wee pet’. When she died, on 21 April 1924, crowds gathered outside her home.

‘The subtle imagination and passionate artistic nature of Mme Modjeska’

In 1880, when Polish actress, and one of Wilde’s Women, Helena Modjeska arrived in London to star in Heartsease, the English title chosen for Dumas’ La Dame aux Camelia, at the Court Theatre, she asked of Oscar Wilde:

‘What has he done, this young man that one meets him everywhere? Oh yes he talks well, but what has he done? He has written nothing, he does not sing or paint or act – he does nothing but talk. I do not understand.’ 1

Born to Józefa  Benda, the widow of a wealthy merchant in Kraków in 1840, Modjeska was a veteran of the stage by the time she arrived in London. At twenty, she had joined a company of strolling players managed by Gustav Modrzejewski, who she married and had two children by before discovering that he already had a wife who was very much alive.

Modjeska left Modrzejewski after their daughter, Marylka, died in infancy in 1865. She took their son Rudolf, later renamed Ralph Modjeska, to Krakow with her. There, she accepted a four-year theatrical engagement before moving to Warsaw in 1868, where she forged a reputation as a talented theatrical actress. Her two brothers, Józef and Feliks Benda, were also well regarded actors.

On 12 September 1868, Modjeska married Polish nobleman Karol Bozenta Chlapowski, who was editor of the liberal nationalist newspaper Kraj. Their home became the focus of Krakow’s dissident, artistic and literary milieu. The couple’s political activities attracted the attention of authorities and in 1876 they felt obliged to flee to California, where Chlapowski established an experimental and idealistic colony of Polish expatriates on a remote ranch in California. A good account of daily life on the ranch is included in Theodore Payne’s memoir, Life on the Modjeska Ranch in the Gay Nineties.

When this experiment failed spectacularly, leaving them penniless, Modjeska was obliged to resume her career. Although she had been principal actress at the Polish National Theatre, she needed to learn English to secure major roles. She accomplished this in a matter of months by practising the language between performances for six or seven hours every day.

Modjeska was fêted in London and reported with delight:

‘My success surpassed all my expectations; everyone here seems to think it quite extraordinary, and my manager has already numerous projects concerning my future.’2

The Prince of Wales visited her in her dressing room and she shared a stage with the great Genevieve Ward at a party given his honour; the two women got on famously. Lillie Langtry came backstage to meet her during a performance of Romeo and Juliet. Sarah Bernhardt, who Modjeska described as ‘the wonderful creature’, sent her a bouquet of white camellias and assured her that she was moved to tears by her performance. When Ellen Terry came to her dressing room, Modjeska declared:

‘Whoever has met Ellen Terry knows that she is irresistible, and I liked her from the first.’ 3

‘There were three inevitables – death, quarter-day and Lady Jeune’s parties.’ (Quarter-days were the four days each year on which servants were hired, school terms started, and rents were due).

Keen to befriend this newfound star, Wilde invited Modjeska to tea. Her instinct was to refuse, since she thought it unwise to visit a young man unaccompanied, but she relented when he assured her that Lillie Langtry and artist Louise Jopling would be there too.

Before long, Wilde and Modjeska had become good friends. They collaborated on a poem, ‘Sen Artysty; or the Artist’s Dream. When it appeared in the Christmas 1880 edition of The Green Room, it was attributed to ‘Madame Helena Modjeska (translated from the Polish by Oscar Wilde)’. 4

‘If there is any beauty in this poem it is the work of the subtle imagination and passionate artistic nature of Mme Modjeska. I myself am but a pipe through which her tones full of sweetness have flown.’

Wilde and Modjeska also considered adapting Verdi’s opera, Luisa Miller, but this project came to nothing and Modjeska left London to tour in the US and further afield

Helena Modjeska died at Newport Beach, California on April 8, 1909. She was 68 and had been suffering from Bright’s disease, a disease of the kidneys. Her remains were returned to Kraków where they were buried in the family plot at the Rakowicki Cemetery. Her autobiography, Memories and Impressions of Helena Modjeska, was published posthumously in 1910.

4. ‘Sen Artysty; or, The Artist’s Dream’ was published in Clement Scott (Ed.), The Green Room: Stories by Those Who Frequent It (London, Routledge, 1880), pp.66-8; http://www.helenamodjeskasociety.com/activity.html accessed on 12 January 2015

John Ruskin (1819-1900), Victorian art critic and social thinker, was a man who had a profound influence on art and life. Among his many admirers was Oscar Wilde, who met him at Oxford University and whose work and ideas were influenced by Ruskin’s thinking.

After he went down from Oxford University with a double first, Wilde headed for London where he somewhat reinvented himself as a socialite and took up with ‘professional beauty’ Lillie Langtry. Although his preoccupations often appeared trivial, from time to time he allowed Langtry to observe his true nature. 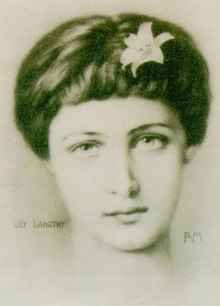 When Wilde brought John Ruskin, then Slade Professor of Fine Art at Oxford, to call on Langtry at her home (some time around 1877-8), she noted that her normally convivial friend:

‘assumed an attitude of such extreme reverence and humility towards the “master” that he could scarcely find breath to introduce him to me’.

According to Langtry, this ‘unusually meek demeanor’ in her friend, ‘aggravated my natural shyness and filled me with exaggerated awe’. She was relieved to report that:

‘Ruskin’s winning voice and charm of manner reassured me, and, taking courage to look at him, I noted that his blue-grey eyes were smiling at me under bushy eyebrows.’

‘that his forehead was large and intellectual, that his nose was aquiline, and that the side-whiskers, made familiar by his earlier portraits, had become supplementary to a grey leonine beard’.

‘His hair was rather long, and floppy over his ears; indeed he was a shaggy-looking individual’.

As to Ruskin’s conversation, Langtry reports:

‘He held forth on his pet topic – Greek art – in a fervently enthusiastic manner, and as vehemently denounced the Japanese style, then at the beginning of its vogue, describing it as the “glorification of ugliness and artificiality,” and contrasting the unbalanced form of Japanese art with the fine composition and colour of Chinese art, of which he declared it to be a caricature’.

My source for Langtry’s fascinating reaction to Ruskin is her autobiography, The days I knew, p.140.

For more on Langtry’s relationship with Oscar Wilde, why not read my Wilde’s Women.