As his life drew to a close, Oscar’s general health was poor. For much of his adult life, he had suffered from intermittent deafness and infections in his right ear, a condition that had flared up in prison but was inadequately treated. In September 1900, he fell ill once again, to the extent that it was necessary for his right ear was operated on in his hotel room. Although the procedure appeared to have been effective, by mid-November he had suffered a relapse and was confined to bed.

During the final weeks of his life, Oscar was nursed lovingly by his great friends Robbie Ross and Reggie Turner. On 29 November, Ross, a convert to Catholicism since 1894, sent for Father Cuthbert Dunne, a priest attached to the Passionist Church of St. Joseph’s in Paris. Although incapable of speech at that point, Oscar was conditionally baptised into the Catholic faith; Ross assured Ada Leverson that was in accordance with her friend’s long-held wishes.

Early on the morning of 30 November, a change came over Oscar and his breathing became laboured. Shortly before two o’clock in the afternoon, he heaved a great sigh and breathed his last. Ross laid out his friend’s body and found two Franciscan nuns to watch over him while he informed the authorities of the death of Oscar Wilde. 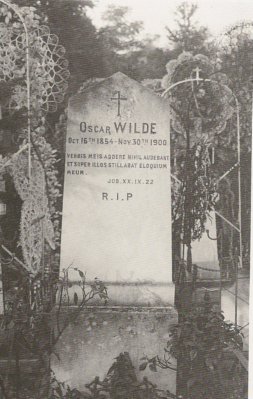