While undoubtedly overshadowed by her older and more famous sister Ellen, Marion enjoyed considerable success throughout her career. Unlike Ellen, she rarely played any of Shakespeare’s women, and appeared in only a handful of his plays, although her first professional role was as Ophelia in Hamlet when she was nineteen.

After enjoying a successful and varied career for two decades, Marion, aged thirty-nine, was offered the role that was to become her most celebrated, as Mrs. Erlynne in Oscar Wilde’s Lady Windermere’s Fan. Although she was third choice for the role behind Lillie Langtry and Ada Rehan, she acquitted herself admirably. Theatre critic Clement Scott declared that she played the part ‘to perfection’.

In his memoir Yesterday, English writer Robert Hichens described how Marion had confided in him that:

the management had grave doubts about her during  the rehearsals, but that she felt certain she could “get away with it”.

His verdict was that she ‘scored a complete triumph in it’.

Offstage, Marion Terry was reserved and protective of her private life. She never married and died of a cerebral haemorrhage at her home in London, aged seventy-three, after a career that spanned five decades.

For more on the original production of Lady Windermere’s fan read Wilde’s Women:

Salomé in Paris: ‘a protest against English morality’.

Tragically, although Ada Leverson, one of Oscar Wilde’s closest friends, insisted that he cared little for any of his plays except Salomé since it most fully ‘expressed himself,’ Wilde never saw Salomé performed. Refused a licence by the English Examiner of Plays, it was staged during Wilde’s lifetime by Aurélien Lugné-Poe, founder of the Théâtre de l’Oeuvre, but its author was in prison at the time.

When Lugné-Poe visited London after Wilde had been sentenced to two years hard labour, he was shocked at how apathetic and powerless the playwright’s supporters appeared to have become. In an act of solidarity, he staged the world premiere of Salomé in his Théâtre de l’Oeuvre in Paris on 11 February 1896, performing the role of Herod himself and casting Lina Munte, a trained dancer, as Salomé.

Several French newspapers reported on the performance and critics were unanimous in their praise for Munte; La Matin reported that she ‘was absolutely remarkable with her ferocious sensuality,’ while Francisque Sarcey of Le Temps noted that she imitated the diction of Sarah Bernhardt, the actress Wilde had originally intended for the part.

A number of critics noted the sympathy expressed for Wilde by the French public. L’Événement described the staging of Salomé as ‘a protest against English morality’. The Journal des Débats reported that:

When the curtain fell, the audience responded to the name of the playwright with rapturous applause.

Wilde, who received no payment for the performance, assured his lover Lord Alfred Douglas:

‘All I want is to have my artistic reappearance, and my own rehabilitation through art, in Paris, not in London. It is a homage and a debt I owe to that great city of art’.

The Reception of Oscar Wilde in Europe by Stefano Evangelista, Bloomsbury Publishing

On 2 February 1889, a joint review of two collections of ‘fairytales’, one from Oscar Wilde and the other from his wife, Constance, was published in the Irish Times.

Mr and Mrs Wilde possess charming children of their own and they have utilised their acquaintance with the infant world in giving to it some delightful fairytales, which even the elders must appreciate. “The Happy Prince and Other Tales,” illustrated by Walter Crane and Jacomb Hood, and published by David Nutt is one of the happiest works which Mr. Oscar Wilde has ever produced; whilst Mrs. Wilde’s fairytales, also published recently and entitled “There Was Once,” are a charming reproduction of the old stories, familiar to our childish days, which Nisbet [sic] has brought out.

The death of her beloved grandmother, ‘Mama Mary’ had prompted Constance to compile There Was Once – Grandma’s Stories, a beautifully illustrated collection of five traditional tales and four familiar rhymes. You can still buy this book by following the link. Mama Mary was Mary Atkinson, widow of Captain John Atkinson, who had been Receiver General of the Post Office. She had lived at 1 Ely Place in Dublin, close to the Wilde’s home on Merrion Square .

This was not Constance’s only foray into writing for children; The Bairn’s Annual of Old Fashioned Fairy Tales in 1887 featured a story called ‘Was It a Dream’ by Constance Wilde. In 1892, Ernest Nister, publisher of There Was Once, brought out A Long Time Ago, favorite stories retold by Mrs. Oscar Wilde & others. Nister also published A Cosy Corner and Other Stories, which included Constance’s story ‘For Japan’, featuring a little girl named Isola, probably after Oscar’s sister who had died in childhood. 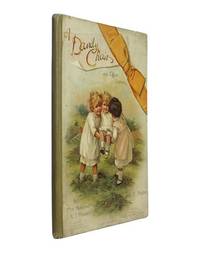 In 1893, Nister brought out A Dandy Chair and Other Stories, an illustrated collection of children’s stories by Constance Wilde, Edith Nesbit and Mary Louisa Molesworth.  One story contributed by Constance was called ‘The Little Swallow’. Although her stories are mostly lost to us now, Constance Wilde’s literary career is covered comprehensively by Franny Moyle in Constance: The Tragic and Scandalous Life of Mrs. Oscar Wilde. You can also read about her life in Wilde’s Women: How Oscar Wilde Was Shaped By The Woman He Knew.