Oscar Wilde’s first play, Vera, or the Nihilists opened in the Union Square Theatre on  Broadway on 20 August 1883. The theatre was full on opening night and the audience included several actors and theatre managers whose productions had not yet opened.

Commentators were struck by the profusion of fans flapping ineffectually in front of the faces of overheated patrons; New York was wilting under the intensity of an enervating heat wave. Afterwards,the Spirit of the Times likened the Union Square Theatre to ‘the hottest room of a Turkish bath’.

Such stifling conditions could not have contrasted more markedly with the play’s setting: a frozen Russian winter that obliged cast members to don heavy brocade costumes, many of them fur-lined. While the audience struggled to cope with furnace-like heat, frozen peasants huddled around open fires onstage. It must have been impossible for overheated patrons to suspend their disbelief.

The plot of Vera, which is based on the life of Vera Zasulich, centres on an insurgent cell led by the beautiful and principled Vera Sabouroff. In true melodramatic fashion, she falls desperately in love with her comrade Alexis, a sympathetic medical student, only to discover that he is the reforming son of the despotic Czar. Rather than assassinate Alexis, Vera plunges her dagger into her own breast to obtain the bloody proof demanded by her comrades, insisting that she is dying, not for love, but to save Russia.

The play started well. There were calls for the author after the first act and Oscar stepped forward to bow his thanks after the second. Although one intensely sentimental scene between Vera and Alexis during the melodramatic last act was greeted with laughter, catcalls and kissing noises from the cheap seats, Vera was generally well received and Oscar’s brief words of appreciation were applauded warmly.

Yet reviews for Vera were overwhelmingly disappointing. Describing it as ‘an energetic tirade against tyrants and despots…full of long speeches in which the glory of liberty is eloquently described’, the New York Times condemned the play as ‘unreal, long-winded and wearisome’. Its critic warned:

A dramatist…who puts a gang of Nihilists upon the stage, on the ground that they are interesting characters of the time and that their convictions make them dramatic, does so at his own peril.

The New York Herald described Vera as ‘long-drawn, dramatic rot, a series of disconnected essays and sickening rant, with a coarse and common kind of cleverness’. Its critic attacked Wilde as ‘not only a buffoon but a bore’. The New York Tribune insisted that Wilde’s play was:

…a fanciful, foolish, highly-peppered story of love, intrigue, and politics, invested with Russian accessories of fur and dark-lanterns, and overlaid with bantam gabble about freedom and the people. It was little better than fizzle. 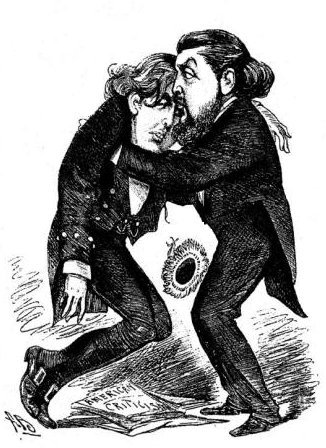 Oscar’s brother Willie comforts him after the failure of Vera Cartoon by Alfred Bryan, 1883

There were notable exceptions: the New York Sun hailed Vera as a masterpiece, while the New York Mirror called the play ‘the noblest contribution to its literature that the stage has received in many years’. This latter publication whipped up controversy by claiming that a clique of theatre critics had conspired to crush Vera, declaring:

It has been the pleasure of the newspapers and that portion of the public which revels in its ignorance and flaunts its vulgarity to assail Mr. Wilde with every manner of coarse, cheap and indecent indignity.

With uncanny foresight, this newspaper declared: ‘It is not the first instance in history of the crucifixion of a good man on the cross of popular prejudice and disbelief’.

The play was cancelled before the end of its short run. Although far from Wilde’s best work, Vera is not a bad play. The reasons for the hostile reception it provoked, one of which was lead actress Marie Prescott’s troubled relationship with the American press, are documented in Chapter 9 of Wilde’s Women.

The play had already fallen foul of authorities in London and you can read about why here.

On the 13th August last, at Bangalore, in the East Indies, Charles Elgee, Esq., eldest son of the late venerable Archdeacon Elgee, of Wexford.

The last known record of Charles Elgee, maternal grandfather of Oscar Wilde, is an obituary that was published in the Freeman’s Journal on 4 February 1825. Charles had left the family home sometime earlier, a departure that obliged his wife Sarah (nee Kingsbury) to raise their three surviving children, Emily, John and Oscar’s mother Jane, alone. It was she who oversaw their education.

Charles and Sarah Elgee’s marriage was a turbulent affair and the early years, during which three of their four children were born (the third, Frances, died in infancy in 1815), were characterised by regular changes of address. Jane was born in 1821, towards the end of this unstable marriage, and evidence suggests that the family was living in County Wexford at the time. Certainly, this is stated as a fact in her obituary in The Guardian on Wednesday 12 February 1896, and The Times on 7 February 1886, and is often mentioned in local histories of the county.

Financial troubles may have contributed to the couple’s estrangement; a deed registered on 11 November 1814, granting Charles £130 from his wife’s inheritance to discharge his debts, contained an ominous clause in which he agreed not to touch his wife’s assets should they decide to separate. This was necessary, since, until the passing of the Married Women’s Property Act 1882, English law defined a wife as subordinate to her husband and stripped her of her legal identity.

It is not known why Charles travelled to India, although an obituary for his grandson and namesake, Charles Le Doux Elgee, son of John Kingsbury Elgee, which is included in the Report of the Secretary, Class of 1856, Harvard, suggests that he may have had ‘some connection with the East-India Company’.

Nothing further is known, by me anyway. Everything I have discovered is documented in chapter two of Wilde’s Women. Perhaps one of you can shed some light on this intriguing mystery?